So I was on my way home and heard a radio commercial for the MONSTER JAM (even at my age I was excited just listening) I figured this would be a great boys night out so I called Jen and ask her to order the tickets. I never let Andon know what we were doing, just that it was gonna be BIG. We arrived two hours early (parked right across the street, was great) so in we went to hang out with the trucks and drivers, VIP style (lol). As Andon turns the corner and realizes what we are doing it was like watching lightning shoot through him. He went from curiously anxious to uncontainable excitement in about 1 second.
When you get there early you can get to the pit where ALL the trucks are. I figure (like anyone would) this is a great photo opportunity. I whip out the camera and start shooting only to be shut down in about 5 minutes by "Pit Crew Officials" all I hear is "You cant's be shootin dem pictures with dat professional camera, you could be press or sometin" to which I smile and look over at Andon thinking "yeah, and here's my assistant, the 5 year old with the big grin and a toy monster truck in his hands". I laugh and put the camera away and take Andon to see the rest of the trucks (I walked about 10 feet and started taking pictures from my hip) As we were walking Andon looks over at me and says "ok, I wanna drive that one (pointing at the green one, his favorite color) to which I respond "sorry buddy, only the pro's get to do that". Just then a driver passes us and insists he is taking Andon around the track, suites him up, straps him in and whips around the place jumping cars twice... ok, not really! actually we just left after looking at the trucks and grabbed our seats but that's what ran through dad's head.
The show was AWESOME, we had seats two or three rows from the bottom of the stadium. After each jump Andon would look at me and scream "that's AWESOME DAD!" At one point a truck jumped, landed a bit wrong and hit the gas. The truck took the corner a bit fast and started spinning out of control. Headed for the stands flipping uncontrollably at about 70 MPH when it hit the safety wall and exploded into flames sending the crowd running for their lives. I grab Andon under my arm (football style) and frantically charge on top of people to save our lives... ok, again, a little exaggeration. The truck did flip right in front of us but no harm, just major wide eyes from Andon (sounded cool though)
All in all both Andon and I had a great time. I love seeing the world through his eyes. To Andon this one night was worth months or years of inventory that his imagination would call upon at any moment. To Andon he was a driver, owned the trucks and made all the jumps himself. For me, I was Andons best friend out at the monster Jam being a driver, owning a truck and making all the jumps not alone, but with my son! 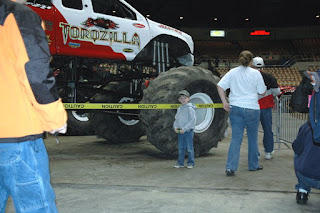 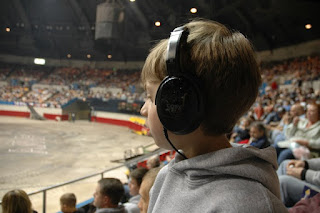 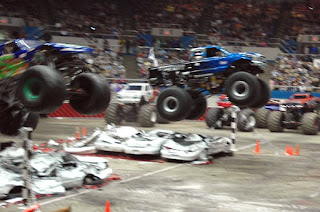 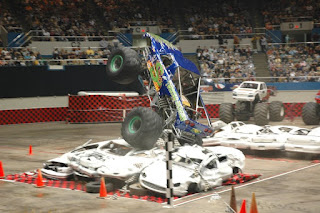 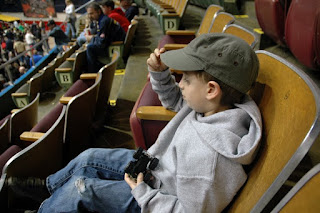 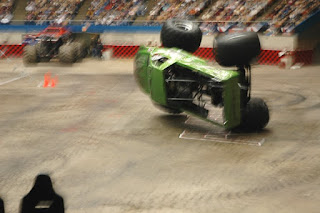 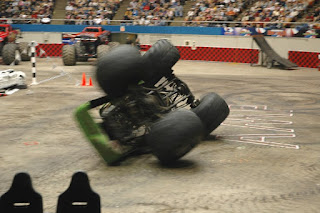 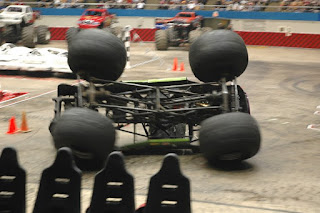 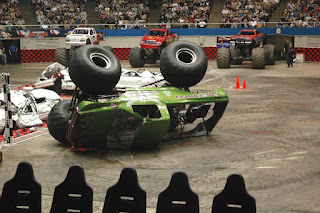 Really, I do have an excuse for the lack of blogging, commenting and phone calls lately. All of a sudden my life has gone to full steam ahead! I posted about my sister being here and all that entails and then we signed Andon up for soccer this spring. Practices begin next week, he is soooo excited about it! We went this past weekend and got his shin guards, ball and shoes.

Well, if that isn't enough to add to cooking, cleaning, taking Andon to school and just having a life.... I decided to take a job!! In the end of 2008 Jared and I talked about our financial goals for 2009. We both decided that we wanted to be debt free by the end of this new year if possible. We are currently living in an apartment and want to take advantage of this opportunity to get rid of excess bills. We still have our house in Florida and are continually praying to be able to sell that. We are so blessed to have a wonderful renter at this time so that takes A LOT of the stress away regarding our house. But besides the house we have one credit card one loan and one auto loan. These things could be paid off with the extra money from Jared's pay but if I took a part time job it would be all that faster!! So I did. We talked about my options... I have a FL massage therapy license and a FL skin therapy license. But they are expired in FL and not valid in TN. To get them current here in TN would take a lot of time and money and neither did I want to spend. My other option was banking. I did personal banking (mortgages, loans, opening accounts,CD's) for a couple years and loved it. But, that is a 9-5 job and I didn't want to leave Andon for a job. So, I went back to my college job, serving tables! ;) I haven't done it since 2001! We live in a great area where you drive by the restaurants on a Monday night and they are all packed. So this seemed to be the best option to make some quick money to meet our goals. I started a week and a half ago at Carraba's and it has been pretty crazy! I had to go through 5 days of training and take a menu test that was so hard! I had to memorize every single item on the menu word for word!!

For example: Rigatoni Martino- large tubular pasta tossed with sauteed mushrooms, sundried tomatoes, grilled chicken in a tomato cream sauce and topped with ricotta salata and scallions.. there were about 50 of these food items and some had a paragraph description.. i did get them all correct but i studied like crazy for a week with flash cards just like i did in massage school with all the anatomy. :) My boss said in all his years he had never seen a menu test taken so good! I guess I took it a little serious but I was nervous I would fail! Anyway once I passed that test I was able to start work and train with the other servers. My first night was very hard, a few of the girls were so mean to me. They were talking about me and wouldn't even look me in the face all night. I left out of there sobbing and not wanting to go back. But I did and it has gotten better. I am in a totally different element than I am used to. But hopefully, maybe I can be a witness there. I am only working 3 to 4 nights a week but it has definitely been an adjustment around here! We're just looking so forward to the end of all of this and no debt!! How exciting! Then we will start to look for a house here in Tennessee and start getting more serious about adoption! :)

Now that my training is over and I have had a chance to breath I promise to catch up on all the blog reading and phone calls! I miss all of you so much! Love~ Jen
Posted by Jen at 6:28 AM 12 comments:

I said in one of my recent posts that I was starting to get caught up on my scrapbooking. I am REALLY behind! I am just finishing Andon's 3yr. to 4yr. book. Then I'll get started on his 4 yr. to 5 yr. book and then start working on current! I have over 1,000 photos still on memory cards that need to be gone through, cropped and printed. Whew!

I took a few photos of the fun pages I did recently. The pictures are not that great but you can still get the idea! :) And i'm no professional scrapbooker either but I still have fun doing it!

Here's all the stuff I have to drag out! 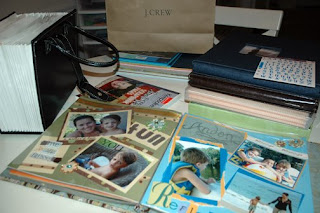 Working on a page of Andon and his sweet friends from home... 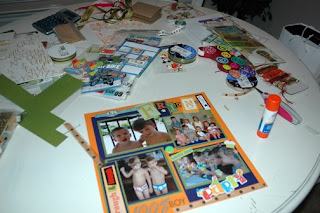 Andon and I last summer... 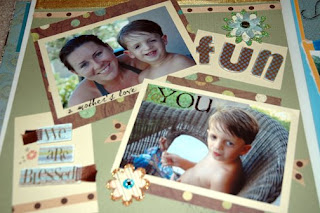 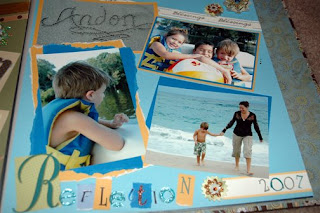 And Andon's 4th Birthday at Disney World. We got to ride down Main Street with the Barber Shop Quartet while they sang Happy Birthday to Andon!! I think Jared enjoyed it more than Andon did! Thanks so much Dan Bullock for making that day so special! 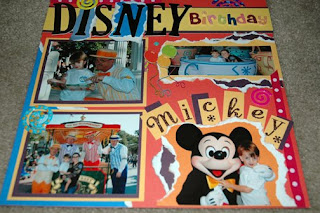 Just a few of the pages I have done, I have a lot more work ahead! And maybe I can figure out a better way to take photos of the pages. Hope you enjoyed! ~Jen
Posted by Jen at 7:26 AM 6 comments:

The past few weeks have been pretty crazy and at times stressful trying to figure out everyone's schedules around here. My sister got here about two weeks after Christmas and only a week after we got home from vacation. You know it takes time to get adjusted after a vacation! :) Not only that, I still feel like I am adjusting to a new city with new people and places. So bringing her into the mix has been a little harder this time and I have had a few attitudes that I am not proud of.

Once she got here we talked over everything she needed to attend each week and on what days. By the way, she doesn't have a current driver's license or a car for that matter! So I am the one who takes her to all of her appointments. After spending all last week doing it I was really overwhelmed and feeling like a taxi cab driver! She has to be taken to school on Tues. Wed. and Thurs. at 8 am and picked up at 11 am and then taken to another class from noon to 1pm on those same days. I also have to take Andon to school on Wed. and Fri. at 9am and pick him up at 2pm. Some of those pick ups and drop offs leave me about an hour in the car and not enough time to go home. I also have to clean the house, grocery shop and try to have a life of my own! :)

So this weekend we sat down together and made a schedule using the ical on the computer. I have never even used it but it's great! You can choose different colors for each person and schedule out each day of the week. Today is our first day being on schedule and we're already off a little. We're supposed to be at bible study right now but Andon is sick. Poor thing has a nasty cold that has been going around here. But the rest of the day and week are scheduled out as well and should be pretty smooth.

I figure the extra time I spend in the car could be valuable time spent with the Lord. Also I could do my Esther homework or read one of the MANY books I have sitting on my nightstand. I just ordered another that I am pretty excited to dive into called The Cry of the Soul.

And truthfully, we brought my sister here to help her have a fresh start. To love, encourage and serve her in this time in her life. Not for me to be stressed, overwhelmed and focused on myself and my time! :)
Posted by Jen at 7:57 AM 4 comments: