Wow, it has almost been a month since I last blogged. Sorry to those of you who actually follow me here. My last post was about Andon and his dental appointment. Since then we have gone back and added a new piece of hardware to the current one. But he only has to wear it at night, it is to help correct his overbite. I thought he wasn't going to like wearing it but he's actually ok with it. We call him "toogie tronic", because he thinks he looks like a Transformer! Too cute! ;) His speech is suffering a bit which the dentist said is to be expected and his palate is opening. They said it could happen but I was praying it wouldn't. He went through so many surgeries to get it closed. We just take it as it comes though and will plan to have it closed at the same time as the bone graft.

In other medical news... we found out that he is farsighted. I was noticing him squinting while doing schoolwork and watching movies. I kept asking him if he could see and he would say yes. I decided to go have his eyes checked anyway and he needed glasses. He really only has to wear them while reading, writing and watching tv. He was VERY excited about getting glasses! This child of mine is so funny about these things. :) The day we got them he was walking around the Dr. office and looking in the mirror saying how handsome they made him look. I do agree. Here's a cute picture of him being silly with his new accessory. 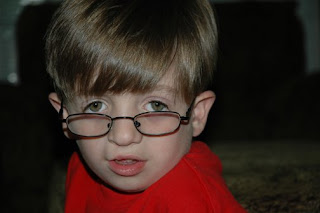 Besides all of that we are having a lot of fun with my niece and nephew here. Jared and Andon drove to Florida last weekend to pick them up. We celebrated Briana's 6th birthday on Tuesday at Chuck E. Cheese. And have been playing at the pool every day since! I didn't even pull out the camera until today so no pics yet but I will have some fun ones of the kiddos soon!
Posted by Jen at 5:04 PM

kids are something else i tell ya!!! and he looks quite sophisticated in the classes... professor like... cute kid

I think his new nickname is "professor" ! He looks so smart!! Have a great weekend!

Love the glasses! He is just so adorable! Jordan missed him at the party. Even the day of, he asked about him spending the night again :)