Last Thursday Andon went in for his 10th, 11th or 12th surgery?? I can't even remember now but it has been quite a few for this sweet little 6 year old. This surgery was a little more involved than the ones in the past but he went through it like a champ. :)

We left the house at 4am and headed to St. Joseph's Hospital in Tampa. After getting admitted and meeting with all the Dr's he went back around 8am. They told us it was going to be about 3 hours but around 9am they call us and tell us "we are just getting started and so far everything is going good!" I was a little shocked that they had had him back there and hadn't even started. My emotions were getting the best of me at times during the next three hours. Just thinking about my boy being back there and what they were doing to him. Jared and I took a few walks around the hospital and watched a bunch of shows on HGTV in the waiting room to keep occupied.

Once they were finished the Dr. came and told us everything went great and that she got to do everything she wanted to do. Which was take bone from his right hip and graft it into the roof of his mouth and front gumline. Also, she did some scar revision on his nose and lip from previous surgeries. She was very pleased with the outcome and said we could go see him. Jared and I were totally expecting to turn the corner and hear a wild screaming child because every other surgery has gone that way. But this time he was still sleeping. He was pretty swollen which was hard for me to see. Once he started waking up we were able to start talking to him and telling him how great he did and how proud we were of him. He never even cried!! Still hasn't. I am just amazed at the strength of this child. Soon after they took us to our room where we would be staying for the night. On the way there Andon was trying to be funny and cracking jokes!! He kept saying "I have a mustache" because he had some tape on his top lip. :)

I was pretty worried about this surgery because Andon is a little older now and can talk about things and understand more. But that has proven to make this time around a little better. Instead of crying a lot about everything he can talk about it with us. We explained everything to him from the beginning. No it wasn't easy but easier. One thing that made it easier for Andon was knowing when he came out of surgery he would have a HUGE GIFT waiting on him. He looked forward to that gift for a month! And within an hour or so he was ripping into it. We had got him the Batcave toy he had been eyeing for a while. He was so excited he said "this is the best day of my life!!!" Amazing what a good gift can do. :)

Anyways, we have been home now for a few days and he is doing so great. He is on an all liquid diet until we go back to the Dr. on Friday for post-op. Hopefully then we can move up to soft foods. It has been very funny listening to him talk about food because Andon could really care less about it unless it's cake or ice cream, that's a different story. :) He is not supposed to be moving around too much so his hip can heal and that is starting to get a little hard. We have 3 floors in our house so before Jared goes to work we have to wake Andon up around 6:30 to clean his mouth out and brush his teeth with this prescription mouthwash. Then Jared carries him downstairs and that's where we stay until he gets back around 6. (I am 35 weeks pregnant so I can't carry him right now.:)) Yes, I am starting to go a little stir crazy! :)

Thank you all so much for praying for Andon through this surgery. Please continue to pray for healing on his mouth and hip. Hopefully within a couple of weeks he'll be all healed and back to some normalcy before our little girl arrives!!

Here is a pic I took with my phone as we were headed home. He was so excited to get to ride in this huge wheelchair. He kept asking me to push him really fast and then let go! Wild boy. :) 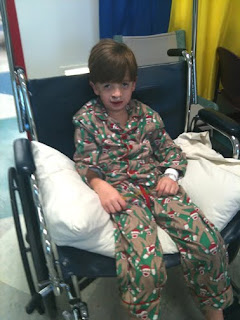 what an adorable pic :) I am so proud of you for being such a brave boy, Andon! Get well soon so we can come play with you

sweet little guy- thanks for the update.

so glad to hear things went really well with him this surgery! He is such a precious and sweet boy! Let us know how is post-app. goes on Fri. You should stay pregnant, cause you look so adorable :-)