It's been about a month and a half since Andon started the Mom's Day Out Program. That decision was one of the hardest yet most rewarding we have had to make since moving. When he first started he would cry every time I dropped him off and then I would cry and be terribly sad the whole time he was there. That has quickly turned into him running into the classroom all proud and yelling "bye Mom, see ya later!" And when he gets home he always says "I want to go to school all day again" I guess because he feels it wasn't long enough. But it is the perfect amount of time for me. Five hours two days a week is about all I can handle leaving him. :) Sweet little thing..

This week they are learning the letter P. So on Wednesday they had a pumpkin patch all set up for the kids to pick out their own pumpkin to bring home. Along with that they did a hay ride ( which he can not stop talking about ) and played games and potato sack races. And today he got to wear his pajamas to school for P day. How cute is that!? So, of course we took a few pictures before we left and when we got there. He chose to wear his Batman pj's. So in the car he was in character mode which made me a little nervous. I had to tell him that you get to wear your Batman pj's to school but your Andon and he kept saying "Mom I am just playing"! He has a pretty good imagination and I don't need him pretending someone in class is the joker or something and want to start to fight! :)

So here are a couple pics we took before school... 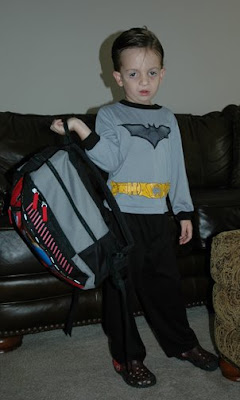 In this picture he is putting his hands up to make his shadow look like Batman. Told you, pretty good imagination. :) 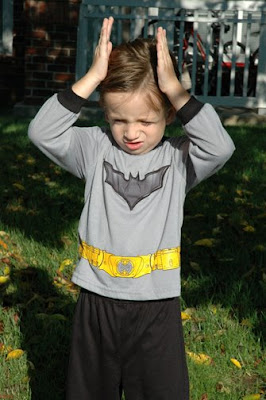 And here is is flying into school. He did it all the way to his class! 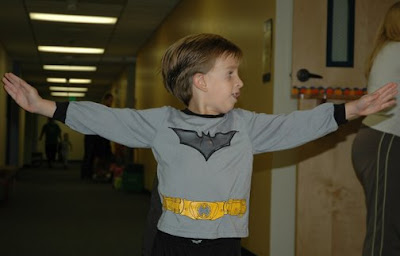 I have two creative and imaginative guys in my life! It is always an adventure around here! :)
Posted by Jen at 7:35 AM

Oh my goodness.... how cute is that! That little guy just cracks me up! I'm so happy for you all that he is loving his school. Ellie is also going to preschool (2 days a week for 4 hours). I would agree, the perfect amount of time.

I'm missing you girl! I don't like that I didn't spend much time with you last weekend :-( It still doesn't feel real that you moved away.

Oh that is so cute!! How fun to have a letter P week! I have been thinking about you...can't wait to hear how Jaime is doing. Please call me when you get a second. TTYL!! Christie