Yesterday afternoon I brought cupcakes to Andon's class. When I got there Mrs. Evers had a table all set up and a birthday crown at Andon's chair. I brought Power Ranger plates and napkins because he specifically asked for them!? He asked for them the night before school and I didn't think anything of it. Well in the morning I told Jared I was going to run to Wal-Mart and grab some red plates and Jared said when he was getting him dressed Andon told him "Mommy's bringing Power Ranger plates to my school". So what was I supposed to do!? Cute little thing... :) Here is a pic of him in his class, waiting to eat his cupcake.. 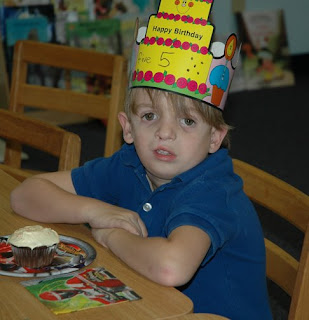 And here is his teacher giving him his birthday spanking's. Not really, they were pretend spanking's. I don't think Andon knew what to do though we've never done that before. It was very cute... 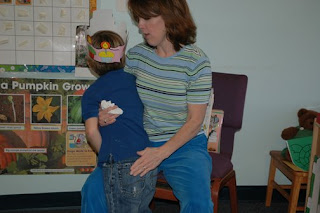 It was so fun to be able to go hang out in his class with him and his friends. They are an adorable little bunch of boys and girls and i'm so thankful that Andon is there.

On a side note. Please pray for me... The one and only sad thing about this time is that it's a reminder of how long we have been trying to get pregnant. When Andon turned 2 we decided we were ready to have another baby and obviously that has been 3 years now. It seems a little harder now because Andon keeps saying "I wish I had a brother". He carries around differant toys and say's they are his brother. Sweet boy. We've gone through infertility treatments and testing and the Dr's say there is no reason why we are not getting pregnant. So please pray for us. Anything can happen through the power of prayer.
Thanks so much ~Jen
Posted by Jen at 12:51 PM

What great Mom you are! Way to go being specific Andon, that's what we get for having smart kids.

I am praying Jen, I so get it. I have thought the same thing on each birthday. Just today Abbie asked me if I was ever going to have a baby in my tummy like other moms. I often forget that this loss is also a loss of hers too. God is always in control, we never understand his timing,but he knows the plans he has for us.

I was just reading that in His timing, God is never late. I know that doesn't make the struggle any easier, but just wanted to share that with you :) I'll add you to my "baby" prayer list!

He has something and someone planned just for you-- one way or another! When it does happen... it will be HIS perfection and make it all the better! Praying for you!

My heart breaks with you about having another baby. I pray that God will show you His plan and give you peace.

Lord Jesus, Jen and Jared's hearts are lonely for another baby. So is Andon's. You know this. You know their pain and You know their loss. Please comfort them and as they trust in You please give them the desires of their hearts. Accomplish Your will in their lives and give them peace. Thank You that You love them completely and You take great delight in them. Your heart is full when they run to You with their pain. You love to comfort us when the circumstances in our lives get hard. Help them to keep running to You and remind them that You are good and You are in control. We don't know all that You are doing, but we trust You. In Jesus name. Amen. Love you friend.

We will continue to keep you in our prayers, sweet friend. You already know that God is in control. Just rest in the peace that, not only is He in control, but He loves you so very much. His plan for your life is a plan to prosper and not to harm you, to give you a hope and a future. Trust in your Maker. Only He knows what the future holds.
I love you
Brittani

Jen-So glad you guys are doing so well up there. I consider you a "friend" (your last post) even though you only sat with me in church when there was no one else for you to sit with!!! I don't think anyone who hasn't gone through your ordeal could ever truly feel your pain...Love Ya!